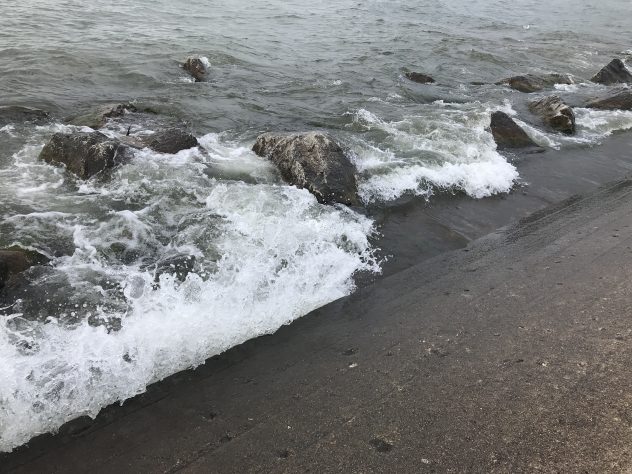 Today brings two Psalms. Psalm 18 and 62 both seem to resonate with me because of the picture of the Lord being the rock, the foundation on which we stand.

To the leader. A Psalm of David the servant of the Lord, who addressed the words of this song to the Lord on the day when the Lord delivered him from the hand of all his enemies, and from the hand of Saul. He said:

I love you, O Lord, my strength.
The Lord is my rock, my fortress, and my deliverer,
my God, my rock in whom I take refuge,
my shield, and the horn of my salvation, my stronghold.
I call upon the Lord, who is worthy to be praised,
so I shall be saved from my enemies.

In my distress I called upon the Lord;
to my God I cried for help.
From his temple he heard my voice,
and my cry to him reached his ears.

Then the earth reeled and rocked;
the foundations also of the mountains trembled
and quaked, because he was angry.
Smoke went up from his nostrils,
and devouring fire from his mouth;
glowing coals flamed forth from him.
He bowed the heavens, and came down;
thick darkness was under his feet.
He rode on a cherub, and flew;
he came swiftly upon the wings of the wind.
He made darkness his covering around him,
his canopy thick clouds dark with water.
Out of the brightness before him
there broke through his clouds
hailstones and coals of fire.
The Lord also thundered in the heavens,
and the Most High uttered his voice.
And he sent out his arrows, and scattered them;
he flashed forth lightnings, and routed them.
Then the channels of the sea were seen,
and the foundations of the world were laid bare
at your rebuke, O Lord,
at the blast of the breath of your nostrils.

He reached down from on high, he took me;
he drew me out of mighty waters.
He delivered me from my strong enemy,
and from those who hated me;
for they were too mighty for me.
They confronted me in the day of my calamity;
but the Lord was my support.
He brought me out into a broad place;
he delivered me, because he delighted in me.

With the loyal you show yourself loyal;
with the blameless you show yourself blameless;
with the pure you show yourself pure;
and with the crooked you show yourself perverse.
For you deliver a humble people,
but the haughty eyes you bring down.
It is you who light my lamp;
the Lord, my God, lights up my darkness.
By you I can crush a troop,
and by my God I can leap over a wall.
This God—his way is perfect;
the promise of the Lord proves true;
he is a shield for all who take refuge in him.

For who is God except the Lord?
And who is a rock besides our God?—
the God who girded me with strength,
and made my way safe.
He made my feet like the feet of a deer,
and set me secure on the heights.
He trains my hands for war,
so that my arms can bend a bow of bronze.
You have given me the shield of your salvation,
and your right hand has supported me;
your help has made me great.
You gave me a wide place for my steps under me,
and my feet did not slip.
I pursued my enemies and overtook them;
and did not turn back until they were consumed.
I struck them down, so that they were not able to rise;
they fell under my feet.
For you girded me with strength for the battle;
you made my assailants sink under me.
You made my enemies turn their backs to me,
and those who hated me I destroyed.
They cried for help, but there was no one to save them;
they cried to the Lord, but he did not answer them.
I beat them fine, like dust before the wind;
I cast them out like the mire of the streets.

You delivered me from strife with the peoples;
you made me head of the nations;
people whom I had not known served me.
As soon as they heard of me they obeyed me;
foreigners came cringing to me.
Foreigners lost heart,
and came trembling out of their strongholds.

The Lord lives! Blessed be my rock,
and exalted be the God of my salvation,
the God who gave me vengeance
and subdued peoples under me;
who delivered me from my enemies;
indeed, you exalted me above my adversaries;
you delivered me from the violent.

For this I will extol you, O Lord, among the nations,
and sing praises to your name.
Great triumphs he gives to his king,
and shows steadfast love to his anointed,
to David and his descendants forever.

To the leader: according to Jeduthun. A Psalm of David.

For God alone my soul waits in silence;
from him comes my salvation.
He alone is my rock and my salvation,
my fortress; I shall never be shaken.

How long will you assail a person,
will you batter your victim, all of you,
as you would a leaning wall, a tottering fence?
Their only plan is to bring down a person of prominence.
They take pleasure in falsehood;
they bless with their mouths,
but inwardly they curse.Selah

For God alone my soul waits in silence,
for my hope is from him.
He alone is my rock and my salvation,
my fortress; I shall not be shaken.
On God rests my deliverance and my honor;
my mighty rock, my refuge is in God.

Trust in him at all times, O people;
pour out your heart before him;
God is a refuge for us.Selah

Those of low estate are but a breath,
those of high estate are a delusion;
in the balances they go up;
they are together lighter than a breath.
Put no confidence in extortion,
and set no vain hopes on robbery;
if riches increase, do not set your heart on them.

Once God has spoken;
twice have I heard this:
that power belongs to God,
and steadfast love belongs to you, O Lord.
For you repay to all
according to their work.

Due to the Coronavirus, we are worshipping on Zoom, visit the Media Page for information

Children & Worship Story is offered on Wednesday’s on Zoom, visit the Media page for information.

Wednesday’s on Zoom – 9am